Jesus Appears as the Anointed One

Worship Theme: Jesus Appears as the Anointed One

Sermon Theme: Living Up to His Name

Worship Theme: Jesus Appears as the Anointed One

Sermon Theme: Living Up to His Name

In recording the account of Jesus’ baptism from Matthew 3:13-17, Matthew shows us a Savior in action for us. Step up to the shores of the Jordan River and see our Savior “Living Up to His Name.” January 8, 2023.

James sat up late at night in a cold sweat. His gaze alternated from the ceiling to the alarm clock and then back again. He was nervous. Tomorrow was a big day for him. That’s the day that he would take his college entrance exam – the ACT. His inner dialogue had put an immense amount of pressure on him: “I must get a good score on this test. If I don’t get a good score on this test, then I won’t get into the school that I want. If I don’t get into the school that I want, then I won’t be in a top-notch program. And if I can’t get into a top-notch program, then I probably won’t be able to become a dentist like my dad. And if I don’t become a dentist like dad, then he’ll be horribly disappointed in me and my family will think that I’m a failure.” Not a syllable of that was the way that James’ father or his family felt, but that didn’t stop James from feeling the crushing weight of those perceived expectations. He felt that the family was expecting him to Live Up to His Name.

There was a young grade school boy – we’ll call him Ryan. Ryan’s father was the principal of his school. Ryan was a good student, a well-behaved kid, but he was a boy. He had his moments like all the boys did. But this time, it was too much. Ryan got pulled into the principal’s office and told that all the kids were going to be talking at dinner about how poorly Ryan had been behaving that day. Ryan disagreed, but there was not much that he could do about it. Ryan’s dad was probably right. He was concerned that Ryan wasn’t Living Up to His Name.

Today’s Gospel is recorded in Matthew 3. Matthew begins his Gospel in a noteworthy way. He begins with a genealogy – tracing Jesus’ human ancestry generation by generation all the way from Abraham to his earthly parents – Joseph and Mary. After the genealogy is the account of Jesus’ birth, which begins with the Angel Gabriel appearing to Joseph in a dream telling him that there is no need to send Mary away: Joseph son of David, do not be afraid to take Mary home as your wife, because what is conceived in her is from the Holy Spirit. She will give birth to a son, and you are to give him the name Jesus, because he will save his people from their sins (Matthew 1:20-21).

And then in the next two verses, Matthew records for us a reminder that this was all pre-ordained. All this took place to fulfill what the Lord had said through the prophet: “The virgin will conceive and give birth to a son, and they will call him Immanuel” - which means “God with us” (Matthew 1:22-23).

Within four verses, nestled here at the beginning of Matthew’s Gospel, we have two of the names of our Savior. Each revealing him to be true God and true Man to be our one and only Savior. Immanuel tells us that in him, God would come to be with sinners. Jesus tells us that he would in fact be our Savior from sin.

And today’s Gospel shows us both truths in action - the account of Jesus being baptized by John. In recording this account, Matthew shows us a Savior in action for us. Step up to the shores of the Jordan River and see our Savior Living Up to His Name.

If you’ve ever been confused about Jesus’ baptism, you’re in good company. The Baptizer was confused about it as well. “This should be the other way around, Jesus! I should be baptized by you!” he said. John knew a lesson that my children are still getting used to. “Please don’t give me clean clothes to wash.” Do any other parents have that struggle? Your child wears a sweatshirt for three hours and then it ends up in the laundry pile! My kids have heard it from me too many times to count: “I can’t afford the time or the expense to wash clothes that are already clean. If it doesn’t look dirty or smell dirty – then it isn’t dirty.”

We tend to side with John on this one, because we are with him in his sinful condition. We daily sin much and deserve only God’s wrath and punishment. We are the ones that wallow in wickedness and stumble through selfishness. We find ourselves stained with the grime of greed and soil ourselves in sin. We have stains that we could never remedy on our own. Like a mechanic’s oily rag that is used up and tossed on the burn pile, we are hopelessly lost and deserve to be tossed into the fires of hell!

But our God sees value in us. He sees a way for us to be made clean again. He gives us new hope and a new heart. He washes us clean with his saving love. The blood of Jesus, (God’s) Son, purifies us from all sin (1 John 1:7).

But he went to the last place that he should have gone. He went to stand in the place of sinners. Not on, but into the Jordan. Not to the place of the all-powerful God, no he left that behind, but he went to where frail and feeble, bigoted and broken sinners stand. He went to that place to connect to you and me. Jesus replied, “Let it be so now; it is proper for us to do this to fulfill all righteousness.” Then John consented.

It’s not easy to comprehend why Jesus came to be baptized. He didn’t need it. He didn’t belong there. But isn’t that really what his entire ministry was about - willingly going places that he didn’t need to go? Where else did Jesus not belong? In a virgin’s womb, in a manger, in the temple teaching the teachers. He didn’t need to be here - befriending sinners, eating at the tax collector’s table, rubbing elbows with the weak and infirm. He shouldn’t have been there, betrayed by his own, arrested and tried, bound and broken, beaten and bloodied. The last place that Jesus should have been was suspended between heaven and earth, pinned to a cross of wood, lifeless in a tomb. Yet Jesus was willing to go to all of those places – places well beneath the holy Son of God. He was willing to go to them all so that we could be forgiven, so that we could be loved, so that we could have life!

In all this, in everything that he did for us, Jesus was Living Up to His Name. He is Immanuel, God with us. He is just who we needed, the Son of God in human flesh to be our Savior. The Word became flesh and made his dwelling among us! (John 1:14). He is Jesus - the one who saves his people from their sin. With his perfect life, with is innocent death, by shedding his holy blood, we are made pure and righteous. And by his resurrection from the dead, the last enemy is defeated. Death can’t harm us any longer. It is now a portal from life here to a greater and perfect life with Jesus in heaven.

As soon as Jesus was baptized, he went up out of the water. At that moment heaven was opened, and he saw the Spirit of God descending like a dove and alighting on him. And a voice from heaven said, “This is my Son, whom I love; with him I am well pleased.”

God the Father voiced his approval of Jesus as his ministry began. He knew that what Jesus was beginning there in the Jordan River would come to completion at the Empty Tomb. He knew that the saving work that he continued on that day would be completed and so he announced his approval and his love.

And because of that perfect and saving work of Jesus, now at our baptisms the Father says the same. There in those cleansing and forgiving waters, we are given the benefits of Christ’s saving work. There we are welcomed into God’s family. There what Jesus has accomplished becomes ours. And so, in ours and in every baptism, God speaks those same precious words: “You are my child whom I love, with you I am well pleased!”

And now, as members of the family of God, we can live up to God’s name. In the way that we show love to others, in the way that we value the people around us, in the choices that we make and the integrity that we show, we can bring God glory and honor. In the obedience that he enables us to deliver, in the service he allows us to conduct, in the love that he motivates us to show, we can live up to his name.

When Jesus stepped into the waters of the Jordan, he was really stepping also into your heart and mine. As he stood in our place, we see him Living Up to His Name as Immanuel and Savior. As we celebrate his baptism, we can’t help but recall and remember and rejoice in our own baptism and the difference that it makes in our lives and our eternity. As heaven was opened that day at the Jordan, we can celebrate that heaven is now open for us, the glorious place where we will spend endless days singing the praises of our God. This is our certain hope and sure future, because Jesus lived up to his name. Amen. 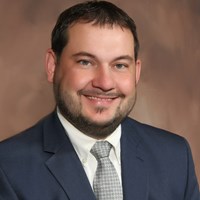 Pastor Brian Hackmann has been on the staff here at Grace since 2019.  He currently serves as the Outreach and Evangelism Pastor here at Grace.