The greatest mercy of God is the gift of his Word, that we might know and rely on his reliable message of love to us through Jesus. We always benefit from God’s guidance in his Word, so we never stop learning it.

Grace Lutheran Church has carried out its downtown Milwaukee ministry since 1849. 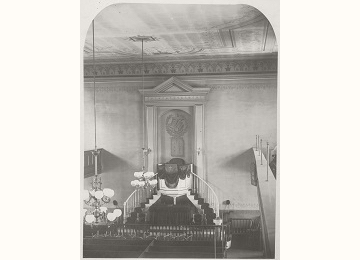 The center pulpit in teh sanctuary of our first church building on our current site. The corner stone was laid in 1850. 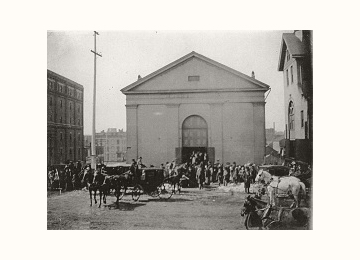 Our first building on our current site, Juneau and Broadway. Ground for this building was broken in 1849 and it was completed in 1851. 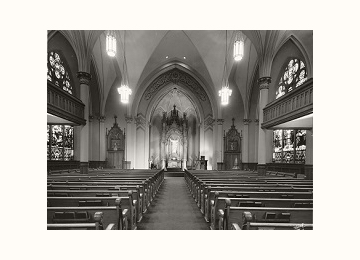 Our sanctuary, before the 1995 renovations to bring back some of it's original beauty.

The congregation's first pastor, Johannes Muehlhaeuser, was trained as a missionary in German schools and came to America to serve the thousands of German immigrants who were flocking to the Midwest in the middle of the 19th century. Meeting at first on the west side of the Milwaukee River, the congregation built its first church building on the east side of the river, and has worshipped at the corner of Broadway and Juneau Avenue ever since the dedication of that building in 1851.

German congregations in Milwaukee grew quickly in the late 1800s, and, by the turn of the century, Grace had outgrown its first church building. Since many prominent and wealthy German-Americans had joined the congregation, the church leaders were able to retain the services of Armand Koch, son of noted Milwaukee architect, Henry C. Koch, who had designed Milwaukee's landmark City Hall. Working in the same German Renaissance Revival style, Koch drew the plans for the 700-seat church which was dedicated in August of 1901.

Already in the early years of the 20th century, the neighborhoods around Grace Church began to change as the German community moved north and west of downtown. Many members remained active and drove their cars to church on Sunday mornings, but others joined newer Lutheran congregations in the city and suburbs. The membership in the early 1930s was about 1,200 members. Within 50 years, however, there were only 370 names on the membership list, and most did not live in the downtown neighborhoods. Leaders eventually removed many of the pews to reduce the seating capacity to about 300.

Despite the dwindling numbers, members worked faithfully to preserve their beautiful church building with major renovation projects in 1921 and 1955. Deeply committed to Christian education from its founding, the congregation erected a three-story school in 1894 just north of the church. Because of the exodus from downtown, however, as well as the influence of the Great Depression, the school closed its doors in 1935 and was razed in 1969 to make room for the present parish center attached to the church.

Downtown congregations in many American cities struggle to stay alive, and Grace was among them as the 1980s dawned. The Lord had other plans for Grace Church, however, and a number of factors came together which enabled and encouraged new growth. As the most historic sections of the city, what we know today as the East Side, Downtown, and the Third Ward, began to be revitalized, many people moved to the local neighborhoods. As Grace recommitted itself to excellence in worship and established programs for Bible study, outreach, fellowship, and service, many people were attracted to the congregation. Today over 1,200 Christians call Grace Lutheran Church their home church.

As Grace began to grow again, parish leaders saw the need to maintain and expand facilities. In 1989 and 1995, the church building underwent major renovations which included the restoration of the chancel to its original design. In 1999, members approved a project to rebuild and expand the pipe organ and remodel the balcony. The present Schlicker organ is an instrument of 53 ranks and over 3,000 pipes. After almost twenty years of frustrating but persistent efforts, the congregation was able to purchase property west of the church and dedicated the $5.1 million Grace Center in 2007. The building houses the administrative offices and the Grace Place coffee shop and serves as a site for community and congregational events. Future plans call for gathering and education space to replace the present parish center and increased seating capacity in the church.

Over its 170-plus years of history, Grace Congregation has been served by only 12 pastors; long pastorates are the norm at Grace! Our present lead pastor, Pastor James Huebner, has served at Grace since 1982, and recently became the longest serving pastor in our history with 39 years of ministry at Grace. He is joined by our associate pastors, Pastor Aaron Strong and Pastor Brian Hackmann.  Grace is blessed with two full-time Staff Ministers Minister of Discipleship Drew Carter and  Minister of Music Kevin Becker.

The story of Grace Church has been closely connected with the story of the Wisconsin Evangelical Lutheran Synod (WELS). The synod, the third largest Lutheran denomination in North America, was founded at Grace in December of 1849, with Grace's Pastor Muehlhaeuser as the first president. Over the years the congregation has encouraged its pastors to serve the synod-at-large. Pastor Carl Gausewitz (1906-1921) was the president of the Lutheran Synodical Conference of North America, and Pastor Huebner presently serves as the First Vice-president of WELS. The congregation also maintains a close connection with the synod's seminary, Wisconsin Lutheran Seminary, in Mequon. Professors from the seminary have served long tenures as preaching assistants at Grace. The first concert of The Seminary Chorus was held at Grace in 1931 and the choir has presented annual concerts at Grace for decades.